X
This site uses cookies to provide and improve your shopping experience. If you want to benefit from this improved service, please opt-in.
More Info
Accept Cookies
Free Delivery On Orders Over £60*
Discreet Packaging Policy
Click Here For Directions To Our Store 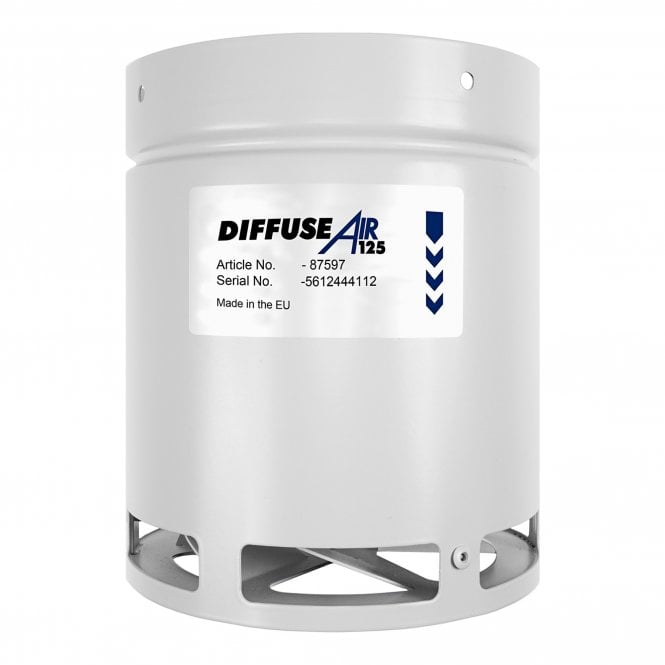 DiffuseAir efficiently mixes all the air in your grow room when attached to a fan. DiffuseAir offers you total control over the climate of your grow room. It eliminates microclimates, high humidity zones and hot spots. Designed and made by Systemair.

DiffuseAir eliminates harsh air streams that can cause wind burn to your plants and salt accumulation in the growing media. Being ceiling hung DiffuseAir gives you more floor space for growing.

Air Distribution
The DiffuseAir system will pull air in from the top of your room and push it out above the canopy, moving the air between the grow lights and the plants. This approach is ideal for reducing temperature microclimates in both ventilated and closed-loop grow rooms. If you have a square grow room, one centrally mounted DiffuseAir system can replace all other air movement fans.

Inlet Distribution
The DiffuseAir system can be used as the distribution point for your fresh input air supply, mixing all the air in your grow room. Simply attach ducting to the fan and pull the air from your desired location, such as fresh air from outside. This allows the DiffuseAir to act as your climate cooling intake fan, distributing CO2 rich air right where your plants need it.

Multiple Systems
Too often, growers run into problems with air movement across larger rooms. Oscillating fans are often pointed at plants causing unnecessary movement of air across the leaves; this forces higher rates of transpiration which can lead to problems such as wind burn and salt accumulation in the growing media. Positioning the DiffuseAir in multiple places above the plant canopy will evenly distribute air, reducing hot spots and humidity pockets.

FAQ
How do I make a purchase?

Making a purchase is easy. Simply select your items, click 'Add to Bag'. The item will be added to your shopping bag. Review the items in your shopping bag by clicking the 'Basket’ link at the top of the page. Click on 'Checkout ' and follow the onscreen instructions to complete your order. If you have any problems we can help you, please contact us on 01642 224544 during our opening times.

What payment methods do you accept and is it safe to use my credit card online?

Can I place an order over the telephone?

For security purposes we prefer you to place an order online using our secure payment system. If however you are having difficulties placing an order online then we can assist you over the telephone.

Is my personal information kept private?

Please be assured that we consider all of the information you share with us to be totally private and confidential.

Which countries do you ship to?

At present we only ship to UK and Northern Ireland.

Am I able to track my order?

Is my package insured and do I need to sign for my order?

All your purchases are insured against theft and accidental damage whilst in transit from Great Stuff Hydroponics to your delivery address. Once your package has been delivered and signed for at your specified address, it is no longer covered. To ensure that your purchases arrive safely and in perfect condition, we require proof of delivery for all orders and are unable to authorise for packages to be delivered without a signature.

How long will it take for me to receive my parcel and how much will the postage cost?

All UK orders are shipped by UK Mail Courier. All UK orders over £300 are delivered free of charge.?We aim to deliver your items as quickly as possible but please allow 2-3 working days.

Orders may be delivered to either business or residential addresses as long as the delivery address is the same as the one registered on the credit card. A signature is required for all Great Stuff Hydroponics orders so please use a delivery address where somebody is available to sign for the delivery.

How do I return an item?

Making a return is easy as we have a no quibble returns policy.  If unsuitable items are returned to us within 30 days of receipt we will be more than happy to offer you an exchange or refund provided that you return them to us in their original condition and packaging.

Before you return an item please email us at info@hydroponics-hydroponics.com to let us know and put a note in with the items you are returning with all your details and order number and reason for return.

When returning items you are strongly recommended to obtain proof of posting as we cannot accept responsibility for parcels lost in transit. We will only refund the cost of postage where the item returned is faulty.

Will I be refunded the full value of my order?

All correctly returned items will be refunded to the original purchaser’s credit card excluding all shipping costs, international customs duties and sales taxes.  Please note that card refunds may take up to 10 business days for your bank to complete, this can vary between card issuers. We will only refund the cost of postage where the item returned is faulty.

Please click the Delivery and Returns link at the bottom of the website for more information on delivery and returns or contact us with any questions.

Please note: Any items added to your basket with the stock message 'Delivery within 5-10 Days' may delay your orders dispatch time, we only send out once all items are ready to ship. It is best if you are in a hurry for an order to contact us first.